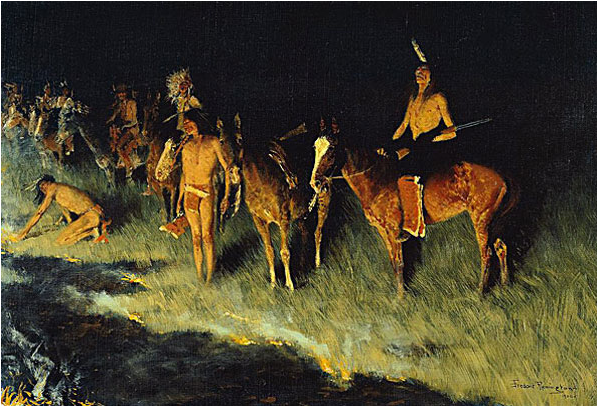 Frederic Remington is known for his iconic paintings of the American West, but few know of his stunning paintings of night scenes. From moonlit landscapes to midnight rodeos, Remington’s masterful use of color and light in these works creates a magical atmosphere that captivates the viewer.

His paintings of the night explore the beauty and mystery of the darkness. They capture an atmosphere that could only be created by a unique talent like that of Frederic Remington. This article will explore the brilliance of Remington’s paintings featuring the magical color of night.

The Color of Night is a series of Remington paintings that capture the subtle nuances of light and dark under the night sky. The famous artist Frederic Remington used these experimental paintings to explore the intricacies of drawing the night at the age of 48.

Remington’s technique for painting these night scenes was to use two or three layers of paint. He would begin with a base layer of white and then layer in different shades of blues, purples, and blacks to create depth and atmosphere. Finally, he used white to create highlights and shadows to bring the painting alive. The result was a dreamy, surreal depiction of nighttime landscapes that were both beautiful and mysterious.

The famous artist Frederic Remington also experimented with his palette to create the perfect balance between light and dark. He often used a combination of white and blue and sometimes added purples and oranges to give warmth. Finally, he combined these colors with deep blacks to give his paintings a unique look that evoked the beauty of a star-filled sky.

Remington’s mastery of the night sky was unparalleled, and his paintings remain some of the most beautiful examples of nighttime art.

Night can be a magical time for the artist to explore new colors and depths of emotion. For Frederic Remington, the color of the night was a mysterious and captivating subject. With his unique eye for composition and light, Remington captured the dramatic beauty of night like no other.

Here are some of Frederic Remington’s most famous paintings in the night-themed series.

Frederic Remington’s 1909 painting “Moonlight, Wolf” is a stunning work that captures the mysterious beauty of the night and its wandering subject. Painted with a grey overlay, the painting features a lone wolf staring right at us with its shining white eyes. It’s a hauntingly beautiful image that evokes the wariness we have about the nighttime.

“Moonlight, Wolf” evokes an atmosphere of loneliness and mystery. We see a single lonely subject within a landscape that stretches far into the canvas. We live in the mystery of why it is alone and what this lonely subject will do next. Have we startled the wolf, or have we become its new prey? Will the wolf flee or attack?

The painting also showcases Remington’s incredible skill for capturing the texture and feelings of his subjects. His careful brushwork adds texture and depth to the composition, with light reflecting off the wolf’s fur and the moon creating an eerie effect.

The Luckless Hunter is a powerful example of Frederic Remington night painting technique. Painted in 1909, this piece is an impressive representation of his mastery in capturing the illuminating effects of a full moon on nighttime and nature.

Unifying its name with its visual subjects, the painting shows a lone subject on a horse left exhausted and dejected on a snow-covered terrain. “Exhausted” from a long hunt and “dejected” from the lack of success from the hunt.

Through Remington’s use of shades of deep blues, he effectively creates a mood of nighttime gloom amidst brightness.

One of Frederic Remington’s most celebrated night paintings is Apache Scouts Listening. The painting depicts European immigrant scouts amidst Native Americans. The Native Americans crouch while the standing scouts cock their hands to the side of their heads; all are listening carefully in the darkness of night.

The painting also shows its subjects in the colors of a night lit by a full moon. We see its deep blue and black contrast brilliantly with the grey moonlight.

Remington captures the moment’s intensity in a way few other artists have been able to. We feel a stillness in the atmosphere, with body language creating a sense of suspense and danger. All these are present while still conveying the beauty of the night sky.

Unlike other featured works, “The Grass Fire (Backfiring)” showcases a different hue of colors and another perspective of the source of danger. We see the night lit by fire, an unnatural orange source created by the subjects.

This painting tells us two stories. First, the subjects seem to have lost control of their creation. The grass fire is going against them, and as it moves closer, we see one Native American seemingly attempting to put it out. We also see something we don’t always see within paintings of Native Americans.

The subjects in this painting have abandoned their native weapons of bows and arrows. Instead, they have adopted guns, the weapons of European immigrants. They have been caught in the shift from traditional to modernism.

Frederic Remington’s night paintings are some of his most stunning works to have received immense praise among critics. His skill in capturing the subtle hues of the night is what makes The Color of Night series so special. His paintings evoke a feeling of mystery and awe while simultaneously providing a glimpse into the beauty of the night sky.

Through his paintings, we experience a unique perspective on the world around us. The Color of Night is a testament to Remington’s extraordinary talent and ability to create captivating works of art that are visually striking and deeply moving.

Is Nicenewdays Authentic Or Fraud? Read This To Know!

Boateng Reviews – Know If boateng Store Is Legitimate Or Fake?